Look who’s here after taking the longest hiatus! Yes, that’s me! I’m back with a mini-reviews post because I’m a bit behind on them. If you noticed that I’ve been missing from the blogosphere – that’s because I had my exams in January and the beginning of February, they were gruesome and I’m still recovering from them.

I feel like they took all my energy – I had in mind to write a post for Valentine’s Day, but I kept opening the tab and closing it and yes, I think I’m in a blogging slump. Please, be patient with me and expect some sub-par posts until I get used to blogging again. Thank you for understanding!

You Asked for Perfect by Laura Silverman 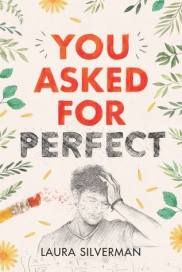 High school senior Ariel Stone wishes nothing more than to get into Harvard and pulling all-nighters in order to make time for his numerous AP classes and extracurricular activities seems to be the only way to get a perfect application done. He thinks he has everything under control, but after failing a Calculus quiz, he might just have to admit that he’s actually struggling and accept tutoring lessons from his enigmatic classmate, Amir. As the two boys grow closer, Ariel starts to question just how much he wants to sacrifice in order to get into the perfect college.

Laura Silverman delivers a highly relatable and realistic tale of perfectionism. Her sophomore novel, You Asked For Perfect tackles subjects that are relevant to any student who’s ever felt overwhelmed by school load and expectations that are a bit too high to be met. Her writing is raw and powerful, the characters are masterfully crafted and the connections between them absolutely shine on the pages of this novel. Readers will surely become invested in the relationship between Amir and Ariel that is filled with Harry Potter references, angst and ultimately, mutual support – as Ariel stops pushing people away for the sake of his grades.

Absolutely adored this book, would recommend it to anyone who’s a perfectionist, to anyone who’s ever felt the pressure to be the best so much that it started hurting. Just READ the book!

99 Percent Mine by Sally Thorne

This suffered of sophomore syndrome, in my humble opinion. I read and adored The Hating Game, but this one fell so short in comparison. So much jealousy and possessiveness, it felt like both of them felt entitled to the other even though they weren’t doing much to be together. Darcy was so jealous on Tom’s fiancée even though she had told him she only saw him as a friend or whatever when he decided to confess his feelings to her. She was very immature and even though everyone seemed to like her, I couldn’t quite tell why – so little effort and she was getting everyone to be her friend – and she wasn’t that charming or anything.

I wish this was something in real life. The pacing was also a bit off, not much happened in most of the book besides these two having jealousy crises, Darcy wanting to help renovate the house and Tom not wanting it. Then they got together around 75% in the book and it felt a bit anti-climatic. Not my cup of tea, but maybe it’s yours!

The Proposal by Jasmine Guillory

You’ve all been screaming for so long about The Wedding Date, the author’s first book and when I got this from Netgalley, I had such high expectations. I will blame my mild disappointment on you all.

This had a very strong start, but then got a bit slower and the romance wasn’t as swoon-worthy as I thought it would be. I also think I would have benefited more from reading The Wedding Date before this because the characters from that one made a cameo and I had no idea who they were. I would have probably appreciated those snippets more if I knew them.

Also, the ending was a bit annoying to me, I thought Carlos’ behavior wasn’t excusable no matter what, he acted like an ass and then pretended to be the hurt one. Nope. Not in this house. I wish I could be less vague with you guys, but that would be a spoiler.

I did love the friendships in this one, though, they warmed my heart!

I want to thank the publishers for offering me e-ARCs of these books via Netgalley and Edelweiss! This hadn’t affected my reviews, nor my ratings in any way.

What book did you cuddle with on Valentine’s Day?

Have you read any of the books I’ve just reviewed? What were your thoughts?